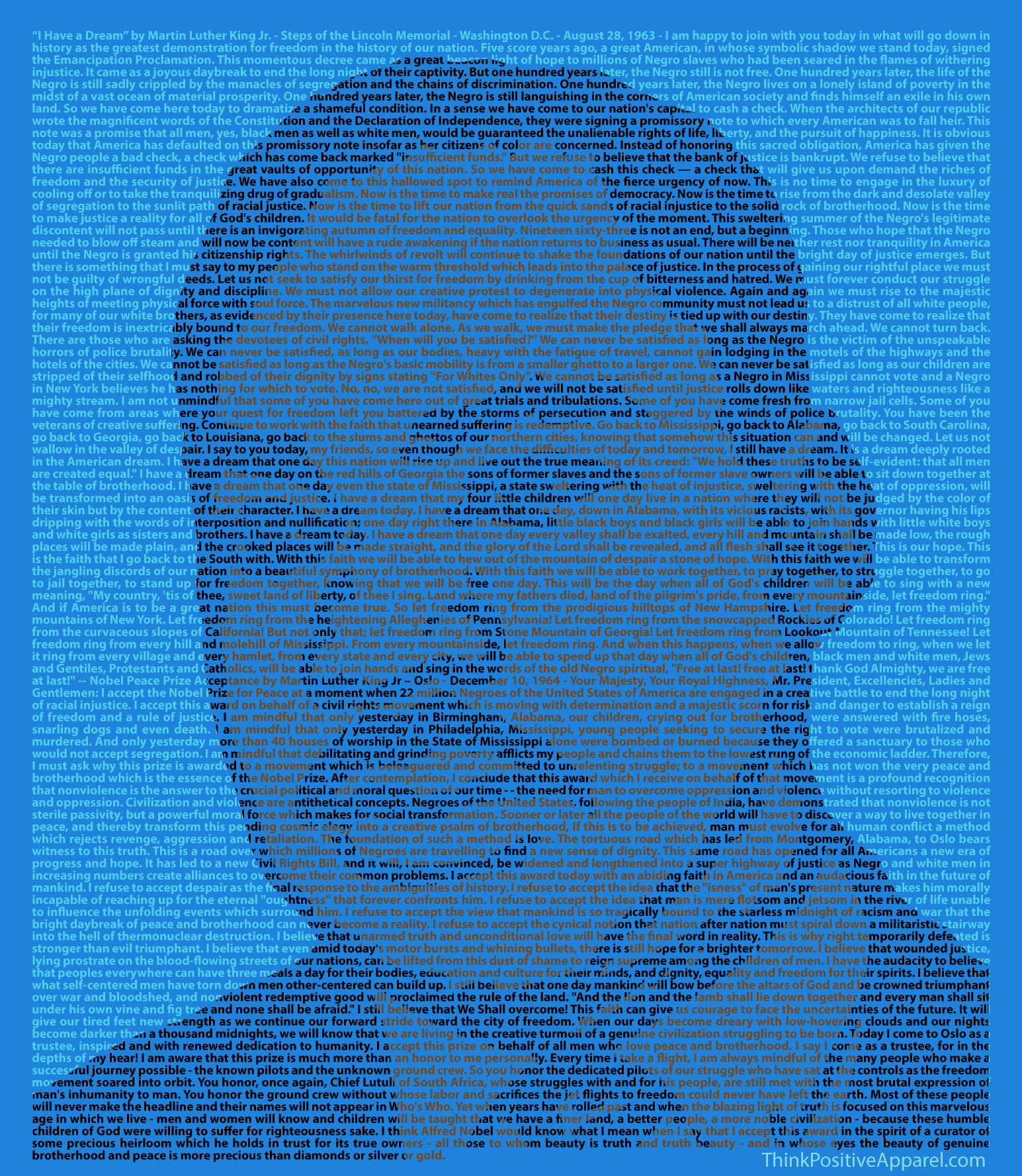 Made out of 2 of Dr. Martin Luther King, Jr.’s most famous speeches, “I have a dream” and his Nobel Peace Prize acceptance.


Positive thinking comes down to recognizing what is both possible and desirable. Dr. Martin Luther King. Jr. was able to see clearly that the barriers of racism, extreme consumerism, and militarism were holding America, and the world, back from fulfilling its true destiny of championing justice and freedom for all and achieving world peace.

“When machines and computers, profit motives and property rights, are considered more important than people, the giant triplets of racism, extreme materialism, and militarism are incapable of being conquered.” ~Martin Luther King, Jr. (Beyond Vietnam — A Time to Break the Silence, 1967)

The major theme throughout MLK’s speeches was that he wanted all men and women to take non-violent actions towards fixing this deep-rooted triplet of maladies. Dr King could see that the segregation and extreme racism were symptoms of a larger problem. That it is the system of society itself that needs to change.

“True compassion is more than flinging a coin to a beggar. It comes to see that an edifice which produces beggars needs restructuring.” ~ Martin Luther King, Jr. (Beyond Vietnam — A Time to Break the Silence)

He saw clearly that working together through peaceful means was just as important as the goals of peace themselves:

“But we will never have peace in the world until men everywhere recognize that ends are not cut off from means, because the means represent the ideal in the making, and the end in process, and ultimately you can’t reach good ends through evil means, because the means represent the seed and the end represents the tree.” ~ Martin Luther King, Jr. (a Christmas Sermon on Peace and Non-violence, 1967)

Martin Luther King Jr. pointed out that the system itself was riddled with hypocrisy:

“And so the collision course is set. The people cry for freedom and the congress attempts to legislate repression. Millions, yes billions, are appropriated for mass murder; but the most meager pittance for foreign aid for international development is crushed in the surge of reaction. Unemployment rages at a major depression level in the black ghettos, but the bi-partisan response is an anti-riot bill rather than a serious poverty program.” ~ Martin Luther King, Jr. (The Three Evils of Society, 1967)

Dr. King called for us to apply non-violence to all situations equally; especially with those that want to use violence against us.

“We suffer from a kind of poverty of the spirit which stands in glaring contrast to our scientific and technological abundance. We’ve learned to swim the seas like fish and to fly the air like birds. And yet, we have not learned the simple art of walking the earth as brothers and sisters. And this is the great dilemma facing America. And, you know, it comes to this point now, we must all learn to live together as brothers, or we will all perish together as fools.” ~Martin Luther King, Jr. (speech to NATRA,1967)

“And before you finish eating breakfast in the morning, you’ve depended on more than half of the world. This is the way our universe is structured, this is its interrelated quality. We aren’t going to have peace on earth until we recognize this basic fact of the interrelated structure of all reality.”~ Martin Luther King, Jr. (a Christmas Sermon on Peace and Non-violence, 1967)

Do you think that any of these ideas of Dr. Martin Luther King Jr are still relevant today? Can we apply these notions to today’s modern world? Do his theories stand up to the test of time as universal principles of humanity? I think we can all agree that the answer is yes, yes, and yes.